Where are the sources of hope and renewal in a world torn by injustice and conflict? What would it mean to “live without borders/ vivir sin fronteras”? Current models of globalization, development, resource extraction, and neoliberal policy, enforced through militarism and hypocrisy, have accelerated social inequity and environmental degradation. Basic conditions for survival - climate, soil, water, shelter, food, clean air - are threatened. While a privileged caste has been excessively enriched by international arrangements, massive numbers of people displaced from sustainable economies and ecosystems are searching for alternative ways of living.
Liberation psychology offers useful approaches to communities, economies, and ecosystems in trouble. Through new practices that have emerged in local settings worldwide, liberation psychology has evolved methods to develop more creative visions of our place in the world. It allows us to focus on questions of paradigm change, reimagining, restoring and rebuilding as we try to think through how we might alter our course toward just and life-supporting agendas for complex living systems.
This archive traces the intellectual and political path I’ve taken on a long journey toward my understanding of liberation psychology. I’ve included books and articles, published and unpublished, along with some sample pieces I wrote or edited with friends about activist projects in which we participated in a past era.  I’ve also shared syllabi, talks, classroom handouts, and paintings. The writings featured here, a few recovered from dusty boxes and drawers, evidence a utopian reweaving of silenced stories and new connections that led me forward like the North star.
I’ve divided the articles into three sections. Activist Projects, 1970-1989 contains materials from local communities in the San Francisco Bay Area, written as we attempted to understand and respond to the implications of the Civil Rights, Women’s, Indigenous, and Farmworkers’ Movements, the Ethnic Studies strikes at San Francisco State, and U.S. government involvement in the Vietnam war and dictatorships and military interventions in Latin America and Africa. Witness, Amnesia, Culture Wars, 1990-2005 focuses on the period in which I returned to the academic world, where I encountered what have been called “wars of memory” and experienced the troubling realization that much academic curriculum in the humanities did not include what had been most important in my life and in my understanding of history and environment. Liberation, Depth, Community, Eco-psychologies, 1997-present shares articles on new paradigms in psychology that dream of participation, dialogue, and repair through cultural activism, local organizing, direct action, and coordinated networks, imagining a tipping point, an awakening to the hope that “another world is possible”. 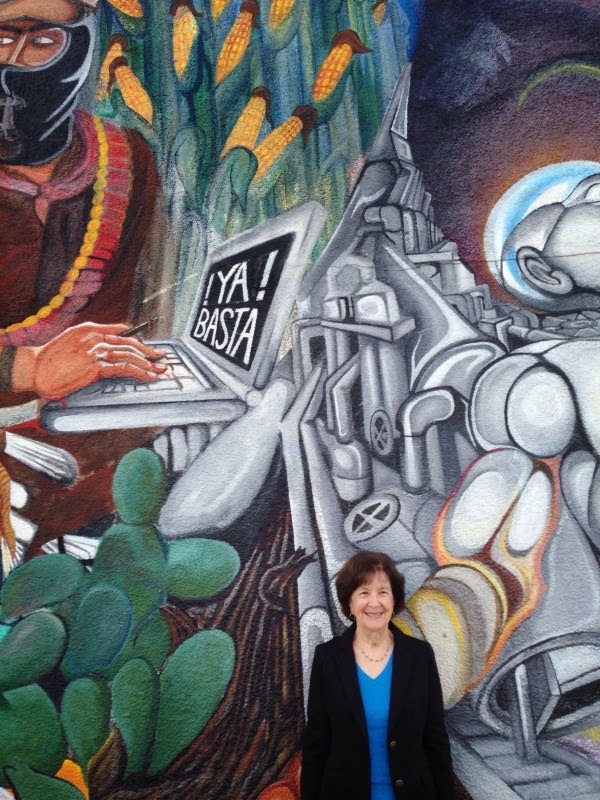 Mexico-Tenochtitlan / The Wall That Talks
by Anthony Ortega and the Quetzalcoatl Mural Project
Los Angeles, CA

Helene Shulman Lorenz has a Ph.D. in philosophy from Tulane University and a Diploma in Analytical Psychology from the C.G. Jung Institute in Zurich, Switzerland.

She is the author of Living at the Edge of Chaos: Complex Systems in Culture and Psyche, and with Mary Watkins, Toward Psychologies of Liberation. In addition to holding teaching positions at Sonoma State University, St. Lawrence University, Antioch University, and the University of Southern California, she has had a long history as a community activist in the Civil Rights, Anti-War, Farmworkers, Women’s, and African and Latin American Solidarity Movements. She currently resides in Los Angeles and teaches in the Pacifica Graduate Institute program in Community, Liberation, and Eco-Psychology.